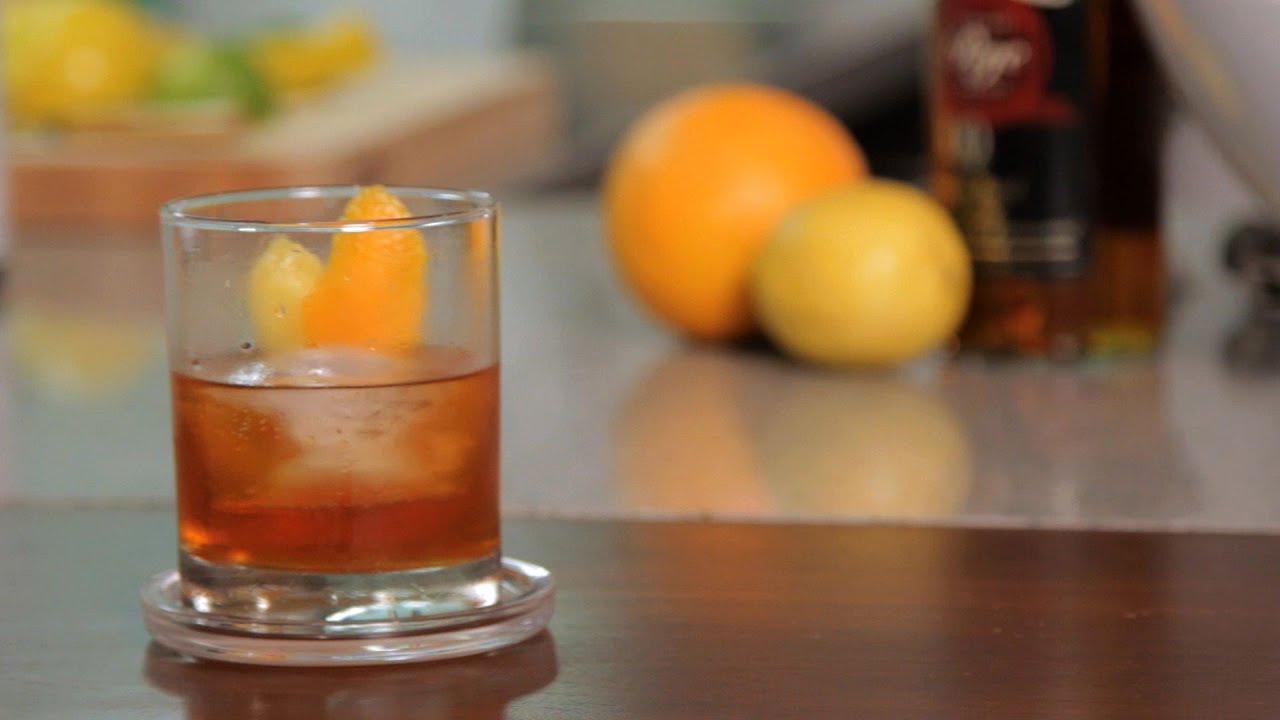 The Old-Fashioned cocktail is so old that 100 years ago they still called it an Old-Fashioned. A lot of classic cocktails were invented in the 19th century. We’re talking 18th century. So it’s definitely earned its name. We’re going to start with two ounces of rye whiskey, rye not bourbon, in this case. Because I think it tastes better, bourbon is a little sweeter, and rye is also what they used back in the 19th century. It was much more popular then. For our sweetener we’re going to use a little bit of simple syrup. You could also muddle a sugar cube if you want. I just think this mixes better.

Just bar spoon of that, not too much or it’s going to get way too sweet. Two dashes of angostura bitters and two dashes or orange bitters, which are a little harder to find, but they are available at some specialty stores and I think they’re really important in making a great Old-Fashioned. You can make a good Old-Fashioned without them two dashes, but not a great one, for my money anyway. Now you notice I’m not going to muddle anything in this drink. I’m just going to stir it the way it is right now.

The muddling of the orange and the cherry was something that came about in the 20th century in the ’50’s post-Prohibition. A lot of stuff got changed around in Prohibition. People forgot how to make certain drinks, taste’s changed, so I’m not saying that’s a bad drink. I just don’t think that’s the most classic way to make it and I prefer it this way. So we’re stirring it the way it is. All right, let’s get our ice, and I’m going to get my frozen glass, and the Old-Fashioned is served on the rocks. And because it’s all spirit, and we’re going to sip this drink, it’s a really stiff drink.

We don’t like those ice cubes to be really small, because they melt really fast. They dilute the drink too much. Give it a nice stir there. So what I did was I took a muffin tin and I put some water in that and made these big giant ice cubes. So it keeps the drink cold, but doesn’t dilute it too much. It doesn’t get too watery. The perfect balance of both worlds. All right, let me grab that ice. Tell me that doesn’t look awesome. All right, that should be good enough. And now we’re going to garnish this, as we strain it over our nice hockey puck, with a lemon peel and an orange peel.

That’s the only fruit we’re going to put in this. I think maybe that’s how the orange and cherry muddling thing started to make it’s way into an Old-Fashioned. They used to put peels on them, and then maybe people started putting the whole fruit in them, I don’t know not recommended. So holding the pith towards us, the white part towards us, and just squeezing gently the oils out into the glass. As there’s the lemon and drop them in there, and there you go. It may not be how Don Draper makes it, but it’s probably how George Washington did the classic Old-Fashioned.